Limenaria, on the 'sunny' south side of Thassos is the second largest town on the island, and in terms of population is close to Limenas (Thassos Town), the capital of the island. You will find a full range of services here, including banks and a post office. The main beach of Limenaria stretches for more than 2 kilometers, until Tripiti to the west. The beach is mainly white sand with some pebble in places and the sea is shallow and crystal clear, you can find water sports, sunbeds and umbrellas for rent, bars and tavernas dotted along it's length, or if you prefer find your own spot, even at the busiest times of the year there is always a quiet place to be had on Limenaria Beach.

Overlooking Limenaria's eastern side is the famous Palataki (little Palace) building which was the administrative headquarters of the German mining company Speidel. It was built between 1903 and 1904 and was occupied until 1963. If you visit the Palataki, you will be rewarded with an amazing panorama which takes in Metalleia beach, Athos, the 'Holy Mountain' over the glistening Aegean and the whole of Limenaria down to Tripiti.

Speidel mined zinc and iron ore in the area and smelted and transported it from what is nowadays called Metalleia beach which is found at the rear of the Palataki, in recent years students and artists from Greece and Europe have turned the beach and old buildings into an art park, have a wander around, it is wonderful! The actual beach is also super with white sand and clear turquoise waters. Again traveling east for 3 kilometers you will come firstly to Pefkari (Blue Flag beach) where there is a well organised water sports center and many tavernas and bars backing the beach. A few hundred meters from Pefkari is Potos, which throbs to it's own rhythm! Potos has a super, organised family beach with a multitude of bars, restaurants, tavernas and shops to meet everyones needs.

Tripiti beach, 3 kilometers to the west of Limenaria and only 2 kilometers from Villa Platanos, can be easily reached by a relaxing beach walk or by road, is also another popular tourist destination and has a good choice of tavernas and beach bars, it is a very wide beach and rarely appears to be crowded. Carrying on in a westerly direction you will come to Atspas beach, just outside of the quaint fishing village of Skala Maries is a small beach set in a beautiful secluded cove. Skala Maries has a fishing harbour ringed with tavernas and cafes who offer you simple, delicious fish and seafood dishes.

On one of the peaks of mountain Ypsario, on a longitude of 800m, lies the most ancient village of the island, Kastro. It took its name from the remnants of a castle that once stood there. It flourished in the years that piracy infested the Aegean Sea and was abandoned later when the locals found work at the iron mines of the Speidel company.At the villages’ square you can find the church of St.Athanasios. For many years the village was abandoned and it was until recently that local owners renovated their manors. In January,at the celebration of St.Athanasios, Kastro becomes vibrant and lively,as many Thassians join the feast with songs and food! Do not forget to visit the area called Apostoloi, where you can see the small waterfalls, and fresh up with a quick dive if you want! It is an amazing route from Kastro which lasts about 40 minutes on foot, through the deep green forest. 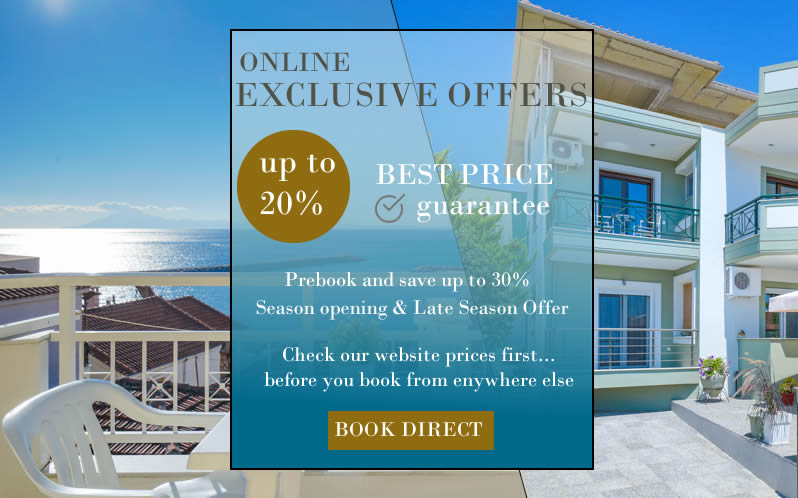